We spent the holidays in Florida this year. We don’t have family there, but since we’ve been living with my parents since September we thought it would be a good opportunity to take a vacation somewhere warm while the kids are out of school. We had a great and exhausting time – as anyone with kids can absolutely confirm. Parenting is a full time job, and it’s more demanding than a paid job, because it is everything, all day and all night. That’s what makes it great, too. But vacationing with three kids is tiring and an exercise in patience and really challenging how you think of yourself as an adult and a parent. We loved it.

We spent our vacation in Palm Coast, on the Atlantic. It was mostly warm, and when it was cold, it was still warmer than New York, so I had no complaints about the weather! Our first night, Bob and I sat out on our balcony overlooking the ocean. The sky was beautifully clear and we could see all the stars. We found the classic (northern hemisphere) winter constellation, Orion, as well as saw the big dipper asterism snugged close to the horizon over the lapping waves. It ended up being the clearest night we had while we were there, so I’m glad we spent it gazing at the stars. The next day we explored our beach. The beach was made up of shells and coquina – so not super soft white sand beach, but a really interesting red/coral colored gritty sand. There were rock formations at the high tide mark that undulated in really interesting patterns. The kids loved exploring. 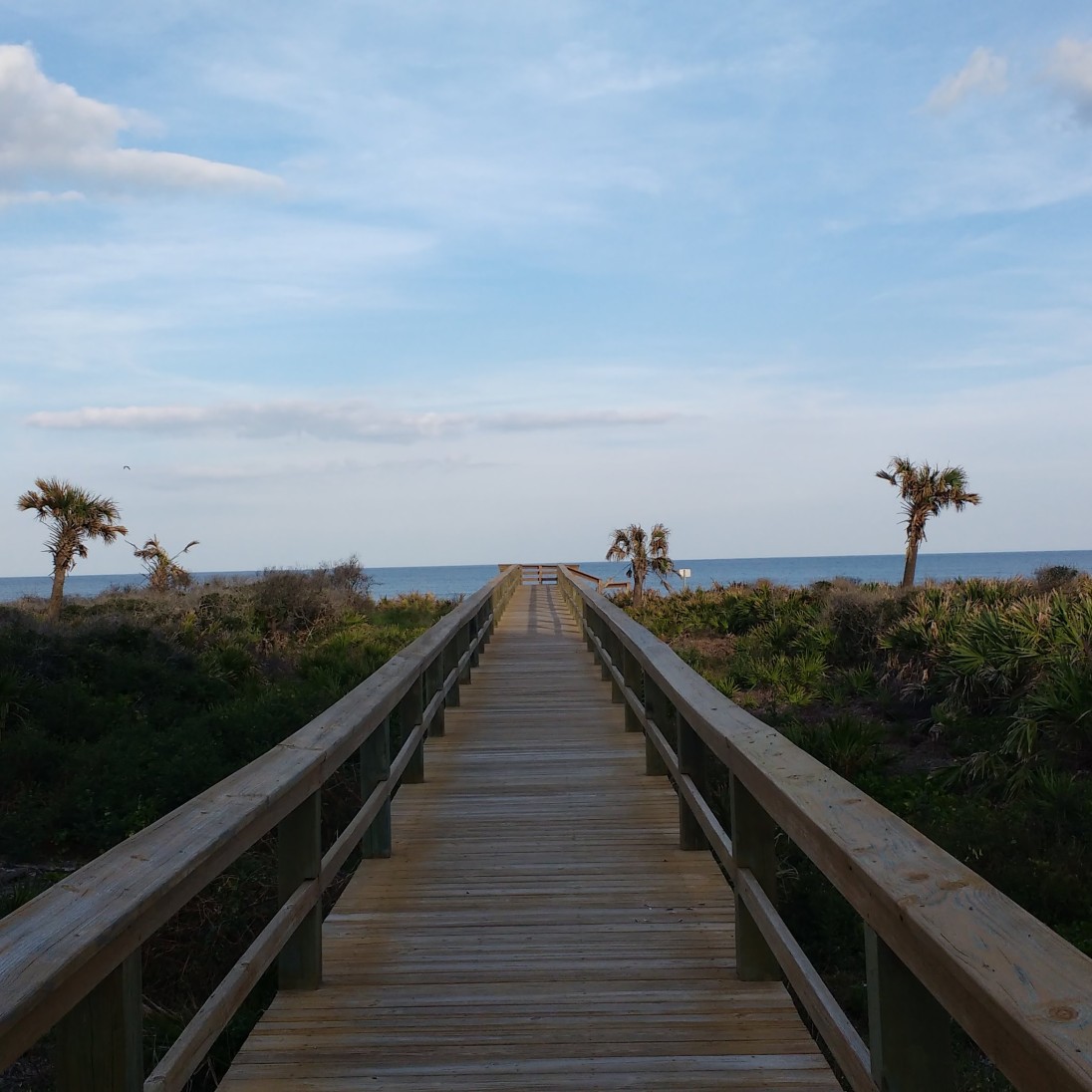 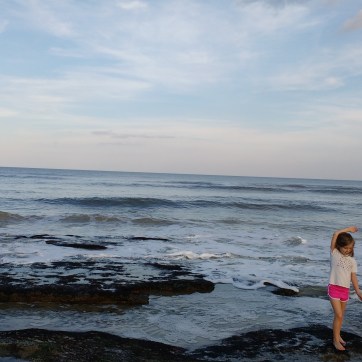 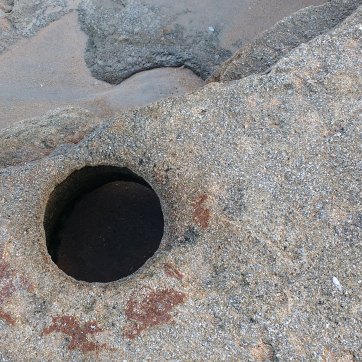 Because of where we stayed and where we wanted to visit, we did spend quite a bit of time in the car driving – every other day we went somewhere. It was sort of like staying at Disney and spending one day at each park, but instead of being at Disney, we were in a condo on a quiet beach, and we saw coastal Florida instead of a Disney park (although, spoiler: we did spend a day at Disney as well).

Our first expedition was to St. Augustine, on Christmas eve. Bob and I (and Grant) visited in February 2017, and we wanted to share the place with the twins as well. We spent a full day there, going to the pirate museum (where the kids did a scavenger hunt), riding the trolley, and getting ice cream. We visited the St. Augustine distillery, where we again picked up some gin and strong tonic, and after the kids were in bed, we enjoyed a nice G&T while wrapping their presents. During our bedtime routine, we called NORAD to make sure that Santa knew we were in Florida, and to find out what time he’d be in the area. The kids were thrilled to talk to one of Santa’s elves again this year, and went straight to sleep (and woke up before dawn to make sure Santa had come).

A park in St. Augustine

A mosiac at the park

Grant granting as hard as a Grant can grant.

Bob and Grant on the trolley

Henry showing off his trolley sticker

On Christmas morning, we unwrapped stockings and presents – as is expected. We made cinnamon rolls and coffee and had a nice lazy day, trying to keep Grant from throwing everything away (he loves garbage cans that pull out of cupboards, and putting things in them). One of the kids’ presents was a day at Disney, so Bob picked up a pack of Disney figurines (Pluto, Daisy, Donald, Mickey, and Minnie), and we made a scavenger hunt for them to find all the figurines, with clues leading them to each one. The final clue told them that we were going to Disney – they liked the scavenger hunt more than anything, I think! We also got them each a small Lego set that had a “ticket” to LegoLand attached. I took barely any photos all day, because we were really being quite lazy. But we did spend time on the beach, and we went out to dinner at a little local spot that had fresh seafood. I did take a photo of the sunset from our balcony, however. 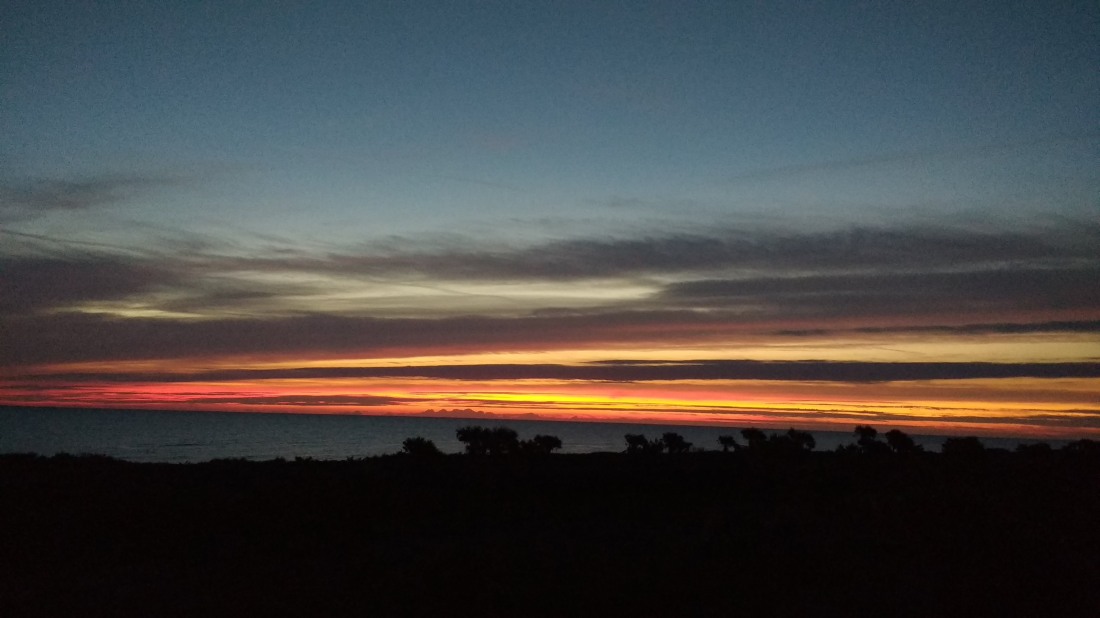 The next day was our trip to Cape Canaveral to visit the Kennedy Space Center. We took a mission to Mars, and saw a really cool re-creation of the Saturn V launch. We took the bus tour around the facility, as well, and saw all the launch pads for the various missions. It was interesting to see how Boeing and SpaceX were heavily promoted. It was also interesting to hear how NASA was positioning itself, now that the Shuttle program has ended – and how imminent they made a Mars mission sound. After KSC, we drove just a little ways along Merritt Island to visit the wildlife refuge there, and took a scenic 7 mile ride on the Black Point Wildlife Drive. We saw a lot of birds and gorgeous scenery, and caught the scantest glimpse of an enormous crocodile.

I thought this was pretty cute.

Bob and the kids with a module 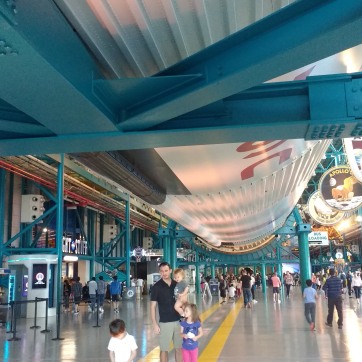 Bob and the kids with a full-size rocket

The next day we took as a rest day. We did nothing. We bummed around and visited the beach and the big kids went swimming with Bob. I tried to corral grant, but as usual it was mostly just me mitigating his destruction.

I just caught the baby careening out of the bathroom like an old-timey bank robber, but with an armful of pads, giggling madly. So yeah, vacation is really restful, thanks.

The day after that, we hit up LegoLand – our furthest destination at 2.5 hours away! It was a haul. But we had a lot of fun, and so did the kids. Grant especially loved a little playground area (a Tot Stop) because it had a slide. He figured out how to climb up the steps and then plunk down on his bum and slide down. In fact, he became quite pushy, and he and about three other little boys were bullying each other over who could get to the top of the slide and go down first. All the moms were trying to keep them in line, but it clearly didn’t have much effect. I rode two rides with Eleanor (we had to sort of split up how we did things, because neither twin was tall enough to go on most rides by themselves, and we couldn’t take Grant on most rides, either), and I really enjoyed standing in line with her, because we held hands and she peppered me with facts she learned from her National Geographic Nature Facts Almanac she got for Christmas. I learned a lot about black holes and Uranus. 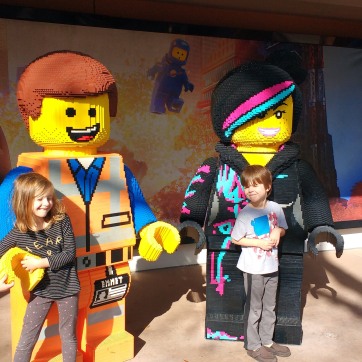 Emmett and Wild Style (she’s not a DJ) 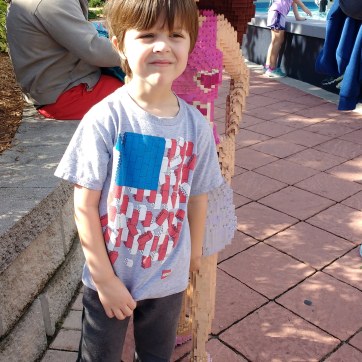 Henry and one of the Lego Friends in HeartLake City

Grant in the Duplo playground. 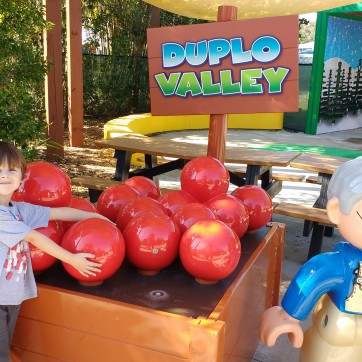 Henry with a giant … apple? 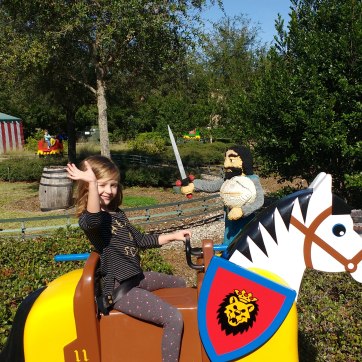 The shuttle takes off every 10 minutes.

I took of photo of the drag racing for my dad. Miniland was the coolest part, in my opinion. 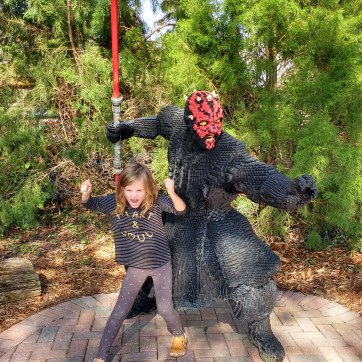 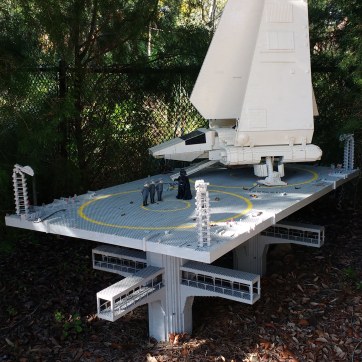 The Star Wars section of miniland had a scene built for each of the first 6 episodes.

He beeped! He booped!

This Milennium Falcon took approximately forever to build. It also took off every couple minutes.

Somebody was in A Mood.

Still in A Mood. 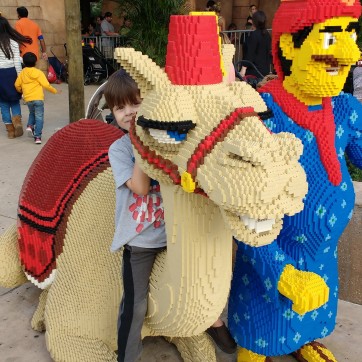 At the very end he perked up!

Ele rode a ride by herself and loved it. 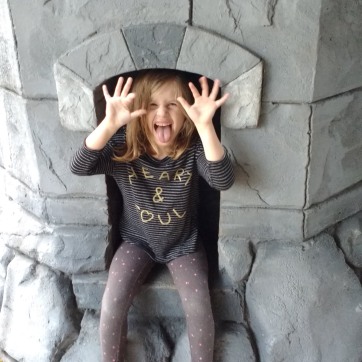 The next day was a bum around day. The long drive to and from LegoLand coupled with a really busy day there really wore us all out. Bob took Henry to get a haircut, and that was really the extent of our activities that day.

On Saturday, our last full day, we went to Disney. We started at Epcot, where we met a couple of princesses and just cruised around for a bit, then we park hopped to Magic Kingdom and holy shit was it busy. One bonus (I guess) of that busyness is that they put on more shows and parades, so that there was always something to occupy the crowds. We only went on a few rides, since we arrived in the afternoon and couldn’t fastpass much, but that turned out to be ok. We made it on Small World, so everything is fine. The kids did a great job of being patient in lines (they were a little bananas, but it’s Disney, and that’s where you go to be bananas when you’re a kid). The hardest part was holding Grant for the lines, since strollers weren’t allowed. We bought a popcorn bucket and kept refilling it, and that kept Grant relatively busy since he was determined to eat his body weight in popcorn.

Waiting in line to see Anna and Elsa 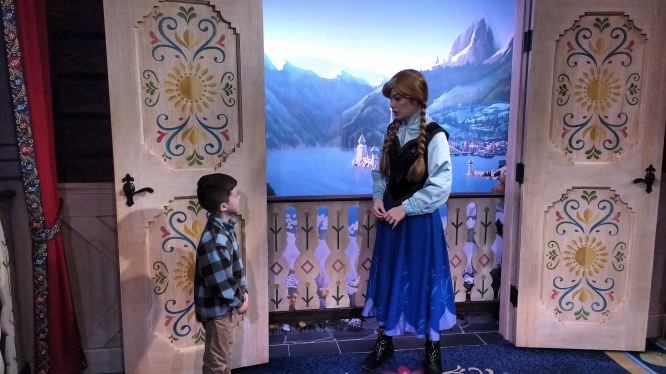 Henry warmed to the Princesses really quickly, but Eleanor got a case of the shys.

Eleanor sometimes takes off like a balloon, and it’s necessary to pull her back to earth 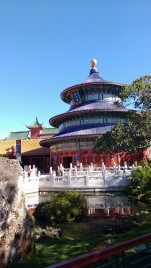 Grant in a hat!

In the Magic Kingdom, the boys got some ears.

On Sunday, we got up at 5 am and flew home. We actually flew out of Pittsburgh, so once we got “home,” we had a 3.5 hour drive to get home. It was snowy but fine for driving. Since we had such an early (and direct) flight, we got settled in at home and had a restful afternoon just bumbling around and unpacking. Vacation was amazing, but it was just as wonderful to get back and spend time with my parents (and Bob got to go watch the Bills do something with one of his buddies). One terribly sad thing that happened while we were gone is that my parent’s dog, Murphy, fell terribly sick and ended up dying. The vet attributed it to Xylitol poisioning — unfortunately the source of which is likely candy that the kids brought home from school. Murphy was my dad’s dog, and they had a really close bond. They sat together all the time, and communicated as friends. Against Murphy’s better instincts, Grant befriended Murph as well, and loved to cuddle him (which Murphy tolerated) and feed him. Murph was a Very Good Boy, and he will be missed.

One thought on “Holidays un-iced”