Right now you can read all about the work that Happiness Engineers at Automattic do, by checking out the #a8cday tag on WordPress.com and Twitter. To get a good idea of the nuts-and-bolts of what Happiness Engineers work on, like live chat, ticket work, bug reporting, and so on, please read some of those posts! They are also really great to read as a group, to see the true variety of experience at Automattic.

My work has changed significantly lately, and I’m not just talking about getting a pushy cat. Let’s back up, to before the cat, and get a little refresher of some of the things that have been different for me over the past 15 or 16 months.

Two Octobers ago (2015), Bob and I discovered we were going to get to have another baby, and that’s really when things started to shift. My team at work was almost at peak size, and I had just come home from a Grand Meetup (when the entire company gets together).

In mid-November, I told my lead, Spittle, about the baby, and he was appropriately delighted for me, and over the coming months probably got tired of telling me that I had his full support in anything I needed. It may have been a small (but I know sincere) gesture on his part, but it was really empowering for me to plan a maternity leave that would be best for my family. I originally planned for a US-standard 12 weeks off. I later (in March) came to my senses and decided to take 5 months off instead. Automattic’s policy is to let new parents take off the time they need, and I dithered over what that should be for a long time. Finally, I emailed our HR team (this is sort of unusual, in that I don’t email anyone else in the company, but I knew I could connect with the entire team in one fell swoop), and deluged them with questions and my own angst, and Ingrid replied and patiently counselled me through everything.

As you can tell, my upcoming leave was already taking up a certain portion of my mental space – I was able to keep it to a relatively small amount week-to-week, because I had given myself a lot of time to plan.

In January, I asked that my team receive no new HEs, and on February 15, the final (ever!) member of Hermes joined; Eduardo. That put my team at 18 Happiness Engineers. Our focus on Hermes was fast communication – we started out with just live chat and mobile support, but eventually spread to include tickets as well very regularly. We had several Brazilian teammates, who also focused on Brazilian Portuguese-language tickets. We covered a lot of bases! Our timezone spread was from the US Central timezone (UTC-6) to the Philippines (UTC+8) – this was a big support team.

In January, we were in a steady holding pattern of 1:1s – I met with everyone on the team for an hour either weekly or bi-weekly. HEs who had been on the team for a long time could choose the cadence, but new HEs (anyone under 6 months) had to meet with me each week. I tried to make sure those all happened before lunch time for me. The reality was that from 9am-2pm every day was filled with 1:1s and team or lead chats.

Anticipating that I would be AFK (away from keyboard) come the mid-year, I chose to do 321s with my team in February, so that everyone would have something concrete to work towards for the next few months, and that then their new lead could pick up seamlessly when the HE was ready for new goals to reach for. I conducted 321s roughly quarterly, and we discussed 3 things that the HE does well, 2 things they want to work on (or learn about, or improve), and 1 way that I can help them get to where they see themselves in the next 3 or 4 months.

From March to June of 2016, I did interaction reviews for everyone on the team. I started working 10-12 hour days a lot of this time. I read through about 250 interactions per HE, covering the previous 3 months of work. Each review took about 3 hours to deliver, as well.

In March, the team and I were discussing in earnest what the next steps would be for the team. It was pretty clear that we were too big, and we’d have to break into smaller teams. There was some resistance to the idea, because everyone was really well bonded, and enjoyed being part of such a successful team. As I like to say, while everyone was bummed the band was breaking up, they were excited to see what came next.

In April we had our team meetup. The team came to me, and indeed, I haven’t been to an offsite (away from Durham) meetup since the Grand Meetup in 2015. At that meetup, we chose a squad structure of three squads that were timezone-based. From that point on, we functioned as three squads within one team. From April to mid-June, the squads got a chance to work closely together as if a self-sufficient team, and there was ample opportunity for everyone on the squads to practice doing things like running squad chats, writing weekly updates, and so on. From April to June, I continued to do 1:1s with everyone and continued to work on and deliver ticket reviews.

In June, the three squads were formalized into teams. During a two week transition period, I ran 321s with each HE along with their new lead. In mid June, it was time for me to take a step back and let the new leads start to work autonomously (I desperately have to supress my urge to micromanage at all times). I formed a Slack channel for the new leads and myself so that I could discuss issues that arose with them as a group, since they all ran into similar issues where I had been unclear or could have better prepared them. I continued to gently mentor (gentor? mently?) them until one morning I logged into Slack and let the leads know I wouldn’t make the video call that day, because I was having contractions.

Then I had a baby. Five month pause at work.

December rolled around! I started back up at work, and I was so freaking excited to be back. I love my children. I do. I’m not actually great at being a stay-at-home-parent, however. It is a really difficult job, and I don’t think I was prepared, or really understood the unreleting tedium/stratospheric activity. It’s such a weird mix of highs and lows and fast and slow – I couldn’t deal with it well. I would absolutely do it again, however. I feel like I bonded incredibly well with all three children during that time.

When I came back, at Spittle’s urging, I started slowly. I worked part time for two weeks as we got our nanny situation sorted out, and I figured out whether or not breastfeeding while working was something I could do (I can’t, really). So I settled into a routine, which looks something like this:

8:00am – get up sometime around now. Get dressed, change the baby, feed the twins, get them dressed. Make coffee (I use a chemex), make toast. Eat. Talk to the nanny. 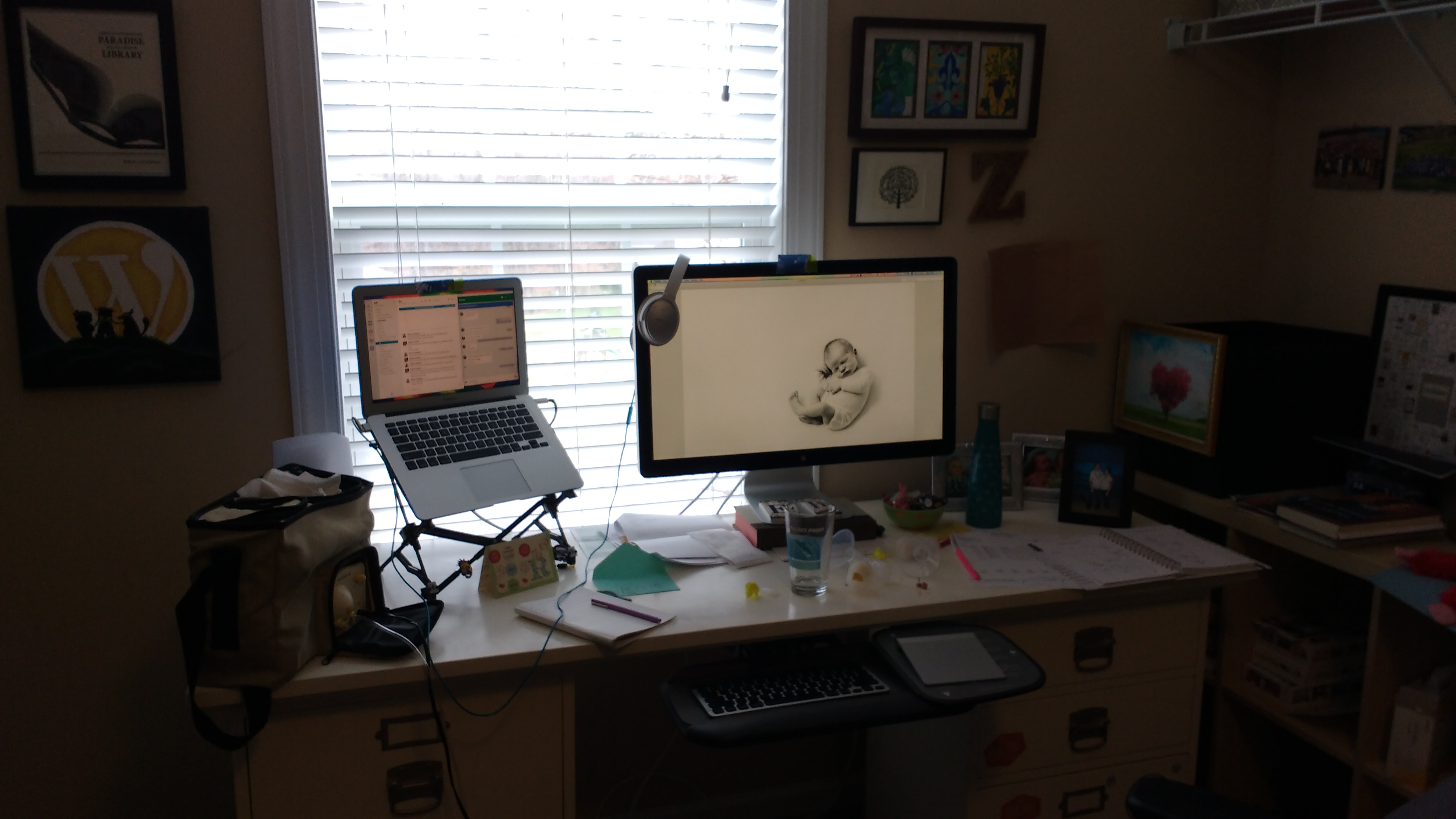 10:00am -12:00pm – this is tickets or 1:1s or team or lead chats. In January, I slid myself into a WooCommerce Support team, to learn more about their work. Before starting on that, I pinged about 10 Woo Support Ninjas, to ask them some very frank questions about Woo and the work they did. I got back such interesting answers, I knew I wanted to find out more.

12:00-12:30pm – I pump again. I eat something. I drink some water. Sometimes I play twodots so I can rest my melting brain. Trying to do Woo tickets is incredibly complex and challenging, and I really love the chance to stretch myself in this really new way. But it’s hard, too!

Around 1pm-5pm – I go back to tickets, or anything else I had to accomplish that day – bug reports, reading background on Woo-specific issues, etc. A lot of solving Woo tickets involves setting up specific plugins on a test installation, so I also do a lot of reading on our various extensions – exploring all the documentation available to our users, so I can best direct users in the tickets. I pump again around 3:30pm.

5:00pm – the nanny needs to leave, so I walk away from work, and go downstairs. I breastfeed the baby, and listen to Henry ask repeatedly if he can play Minecraft.

5:45-6:00pm – I make the kids dinner, and we talk about their day and what’s coming up the next day. Bob usually gets home around this time.

6:00-7:00 – I or Bob will make dinner for us (sometimes if Bob gets home early, we will have a normal family dinner and all eat together a bit earlier). Depending on how tired everyone is, we will either do something as a family like play a card game or a board game, or we will let the kids play Xbox while Bob and I talk and connect over a glass of wine. I feed the baby again.

8:30pm – twins are out of the bath, and Bob gets them in jammies and reads them stories. I feed Grant again.

9:00pm – twins are in bed with the lights out. I read Harry Potter to them on my phone, while feeding the baby (he tanks up at night).

10:00pm – Bob and I watch something on TV (we’re currently watching Orange is the New Black), or we put on some music and just hang out.

Right now, I’m helping to wrangle a squad on my Woo team – much like those Hermes squads split into squads before becoming proper independent teams. I have been given charge of a small flock of Woo Ninjas who reside in Europe and India. I’m looking forward to the challenge of helping them continue to set and reach goals, while also finding out more about Woo work. It’s going to be a fun and interesting challenge! The team is meeting in Lisbon in a few weeks for a meetup, but I won’t be going along (unfortunately). I am not traveling until Grant is a year old, and I’ll wean him then. My next meetup will likely be the 2017 Grand Meetup, in September – two years after my previous offsite meetup. How much has changed!