The first time I was pregnant, with the twins, I wanted to know the unknowable. I wanted to know exactly what it would be like to give birth. I’m not sure why we say “giving birth” – we don’t say “giving poop” although we do say “give a shit” but that is something altogether different. Birth is really not something you give so much as something that is thrust upon you and you have to react to. I suspect it has more to do with the idea that women give. Men take. If men gave birth, it would be called “taking birth” and birthing videos would be full of guitar riffs and screaming eagles and rap. I digress. It’s wonderful. Really. It’s just also the most terrifying thing ever.

Think, however, for a moment, of the most powerful man you can. Barack Obama. Dwayne “the Rock” Johnson. Vladimir Putin. Michael Jordan. Kim Jong Un. Your dad. Close your eyes and imagine these men.

Not one of them can give birth. They can’t even come close to it. A woman’s body changes more in 40 weeks than a man’s will in his entire lifetime, when she’s growing a baby.The world’s big secret is none of these men are as powerful as women, not really. <slides up on soapbox> So of course it’s insane that men have given themselves permission to legislate women’s bodies, as if their inability to create life breeds such insecurity that they have to try control those who can bring life into this world. And we let them! Ridiculous.</soapbox> (but did you catch the pun?) Whenever you’re not sure how much of a boss you are, just remember that you can create life – this applies whether or not you ever choose to have children.

So what happens? I’m sure you’ve seen videos of birth. If you haven’t, don’t Google “giraffe giving birth,” particularly if you’ve never given birth before but are going to give birth soon. A birth video can’t show you everything, even when it shows you everything.

There are many, many ways to give birth. At a hospital, at home, vaginally, cesarean. With twins, there’s the possibility of the “double-whammy” – having the first twin vaginally, and the second via c-section. You can have an epidural and drugs (yes, two different things), just drugs, just an epidural, neither. You can have an easy one- or two-push birth. You can labor for days. I can’t tell you everything, but I can tell you some things.

First, behold some photos of newborn babies, to fortify yourself. 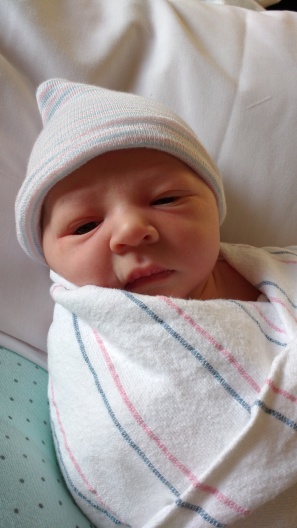 With the twins, I was induced. With my induction, I checked into the hospital around 8:30am, and the twins were born at 3:02 and 3:15pm the same day. That is quick. An induction can take a few days, and after that point, you’ll probably end up with a c-section.

For the induction, I was hooked up to an IV, where they would administer the drugs (pitocen, and whatever else I would need), and monitors on both babies. The babies’ heart rates dropped with the bigger contractions, and they know that happens and want to watch it. My induction started out really boringly. For one thing, I was 38 weeks pregnant, so my body wasn’t really into the process.

Every half hour, they increased my pitocen. I wasn’t allowed out of bed, but these days you are able to labor walking around and however else you’d like even with an induction. Finally, Henry slipped off the monitor (Eleanor was in front of him, so he was hard to keep track of), and they screwed a probe into his scalp (he was engaged – his head was pushing on my cervix), breaking his bag of water. Then the pitocen kicked in and my body got the message. The contractions were so on top of each other that I couldn’t get breath between each one, and they asked me if I wanted drugs. I said yes, and I was given narcotics to take the edge off. I wish I had known what they meant, because I would have probably elected not to have the drugs. They weren’t that useful for me. Next, I got the epidural.

My epidural was simple. They slid a needle into my spine (you sit up, which is the worst part, because your belly is cramping) and taped it in place. It didn’t hurt. Within a few minutes, my lower half was numb, but I could still feel the pressure of the babies. I felt present, but not as aware as I’d like to have been (because of the drugs). Epidurals don’t work for everyone. I know a handful of women who only felt numb on half their bodies.

Within a half hour, my cervix went from 7cm to 10cm, and after a few pushes, the doctor used the vacuum to assist both babies out in quick succession. I’m not sure why he chose to do that, and there is actually a lot about the birth that I think was done because that OB/GYN was very traditional (and I didn’t like him). Shortly after, I delivered the placenta.

With my second pregnancy, which was not induced, I labored at home all day, and when it was just a touch too late, headed to the hospital (as you may recall from an earlier post). This time, I labored off of monitors, on my hands and knees, and it was truly wretched. I didn’t get drugs or an epidural, and I was fatigued in the extreme when Grant was born. I was too tired to deliver the placenta, except you don’t get to be too tired to deliver the placenta.

What are some wildcards with birth?

Well, you’ll probably poop. You won’t know if you do. But everything in your belly is cramping and pushing a baby that is literally shaped like a watermelon out of your vagina. Anything in your lower intestines will get delivered, too. The medical professionals won’t care. If you have someone in there with you, they’ll probably be so overcome by all the screaming and rage emanating off of you that poop will be the least of their worries.

You might tear your vagina. If you don’t tear it, the doctor or midwife may cut your vaginal opening to make more room for the baby. If either of these happen, you’ll get stitched up right after birth. You won’t feel it because your cooter has literally just been wrecked. The nerves are just blasted. It can take a long time for the nerves to start feeling normal again – so be generous with yourself when it comes to sex. Don’t be worried if things don’t feel like they used to. It’ll be ok eventually.

You MIGHT screw up your urethra. It doesn’t happen often, and it can be fixed, but you may end up with a catheter for awhile. A catheter is not a bad thing – I had one with my epidural and I begged them to just leave it in so I wouldn’t have to get up to pee after delivery and of course they laughed me down.

This isn’t a wildcard, but after birth you’ll have to get up to pee, and you will pee out about a gallon of pee and clots and clots of blood. It’ll be like a murder. You’ll get some nifty mesh undies (steal as many of these as you can when you leave – the nurses will help you), enormous pads that are the size of a desk day planner (I’m not kidding), and ice packs that go on top of the pad to soothe your savaged gal. Some hospitals will give you this amazing numbing spray and witch hazel pads. Others will not. You’ll get 800mg of Motrin, around the clock. In my case, I didn’t really need the Motrin after the first day, but I took it dutifully until I left. I also stopped using the ice packs after the first 12 hours. You’ll be given a new bed in a new room (one that isn’t drenched in your own blood), and you’ll sleep on puppy pee pads, because your body won’t get the memo about not covering an entire new room in blood. You won’t care about any of this. You’ll be euphoric because you’ll have a baby.

So the truths are:

If I were in the position to give advice, I’d say, find someone you love – your partner, a friend, a parent, whomever, and have them be with you for this. You’ll have to leave him or her behind, but they are the one who will be at the other end, holding onto your body so you can find it again, when the haze clears. Let them take care of you while your mind detaches from the pain and your heart dissolves and burrows into the tiny life you’re ejecting. You’re going to want someone who loves you, because you are going to need them, but you’re going to be fully absorbed with the baby who has your heart inside them, and you won’t be very aware of the person who is tethering you to reality. They’ll forgive you. After all, you just pulled off the greatest trick there is. Now get out there a take a birth.