For two weeks this summer (and next) Bob needs to attend field lab work at the University of North Dakota in order to complete his degree. So we decided to jump on this opportunity to have a quality family roadtrip, like the kind we grew up taking!

The trip ended up being 1,403 miles (according to the Google Maps). It was the first big trip we took with the twins that was a majority of travel. Although the mileage to Hawaii and California was obviously much further, spending a solid week driving in the car with a couple toddlers is a different beast.

It was a blast.

Bob drove out to Grand Forks, North Dakota with his dad the weekend before this first week of classes. They drove straight through in a day and a half. He attended his first week of labs and focused on his schoolwork, and the following Saturday, the twins and I flew out to meet him.

The Saturday we flew out to Grand Forks, we had to get up a little early (apparently too early for Eleanor), and drove to the airport in Buffalo.

Here are my big tips for flying solo with 20 month old twins:

Our layover in Minneapolis was about 45 minutes (until boarding time) so we sat on the plane and waited for everyone else to deplane. This was a larger plane (two rows of 3), and we were near the back. One of the flight attendants came back to chat with me (and be the last crew member off) and helped me by holding their backpack tails while I readied the stroller after we got to the jetway. I thank her.

In Minneapolis, we got snacks and did diaper changes. We found our gate, parked the stroller and walked around the area together. The kids were grateful to stretch their legs (as was I). Right before boarding, I refilled their sippies.

This was a smaller plane of two rows of two and maybe 20 rows or so. A young mother with her own infant in arms was across the aisle from us. The baby was about 8 months, and Eleanor was obsessed with her. She kept pointing and saying, “baby! Sha baby!” Luckily it was adorable.

Again we waited for everyone else to deplane, and since we were near the front when everyone passed us, Eleanor said, “See ya! Bye-bye!” Henry was glued to the window pointing out all the trucks.

Getting off the plane and seeing Bob again was the best feeling. The babies thought so too!

When we got to Grand Forks, we were only about 20 minutes from the motel, so we drove around a little while the kids took a car nap. Then we found a big park and let them out to run and play. 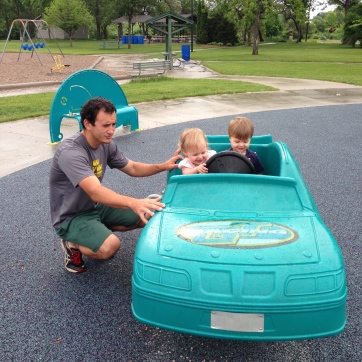 the only unfriendly restaurant in North Dakota

Many lunches in the motel

We did go to the mall

back at the boundless playground

Bob managed to get his work with his team wrapped up by Thursday morning, so we headed out by about 11 am on Thursday.

We got on the road and looked at this for awhile:

We decided to stop about an hour down the road for lunch. Our one requirement was that the town had to have at least a population of 600.

The main street stops right behind me, and ends at the building in the distance behind Bob. That was it. It was a good lunch.

We stayed at a small cabin rental while in Duluth. Directly across the road was Lake Superior. We went down to the beach and this is where Eleanor learned she could collect rocks in her pockets. Sweet girl. Henry was too busy throwing the rocks in the lake to collect them.

These are from a variety of beaches in Duluth:

We got lunch by Canal Park and were sitting outside in some high humidity heat. There were occasional sprinkles, and all of a sudden it was as if someone opened a freezer door. The wind shifted and suddenly the entire area was cold and the fog rolled in. We were on our way to Enger Park and Tower, so we got some neat views of the fog, city and lake:

Two photos that can’t be missed: 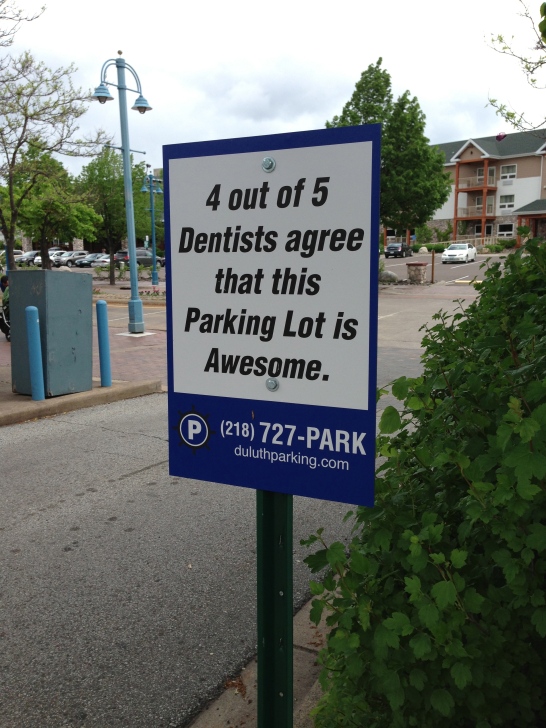 We spent Thursday and Friday in Duluth, then headed for Minneapolis.

We ended up staying one night in Minneapolis, so we stayed in Bloomington near the mall. One pro tip I have for staying with twins in hotels: stay somewhere you can get a suite with a separate bedroom. Our place of choice is Staybridge Suites. It has a fully stocked kitchen (even has a dishwasher), laundry is included, and you can close the bedroom door when the kids go to sleep so you can stay awake later than 8pm.

We didn’t get to do everything there is to do in Minneapolis, but I found this to be an absolutely charming city. Here’s what we did that I strongly recommend.

At the Twins game, the kids were given a “first game certificate” and it was free to check the stroller. This is a really family-friendly park – lots of areas to run around. 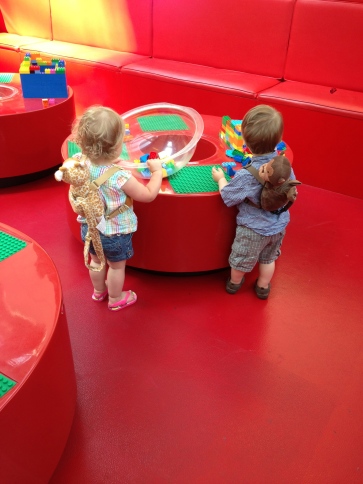 We left Minneapolis and headed into Wisconsin. We got to Eau Claire by that evening and stopped for the night. Indoor pools are lifesavers for restless kids and parents. We went to every indoor pool we were able to and it was a lot of fun.

After Eau Claire we went to Wisconsin Dells.

I did not know how highly people in the midwest value water parks. I don’t get it, frankly. Anyway, I had never heard of Wisconsin Dells, but it is a really popular tourist trap. Go there if you want a lot to do, because there is a plethora of mini-golf/water parks/boat tours/cheap t-shirt shops, etc.

And the gorgeous Wisconsin River: 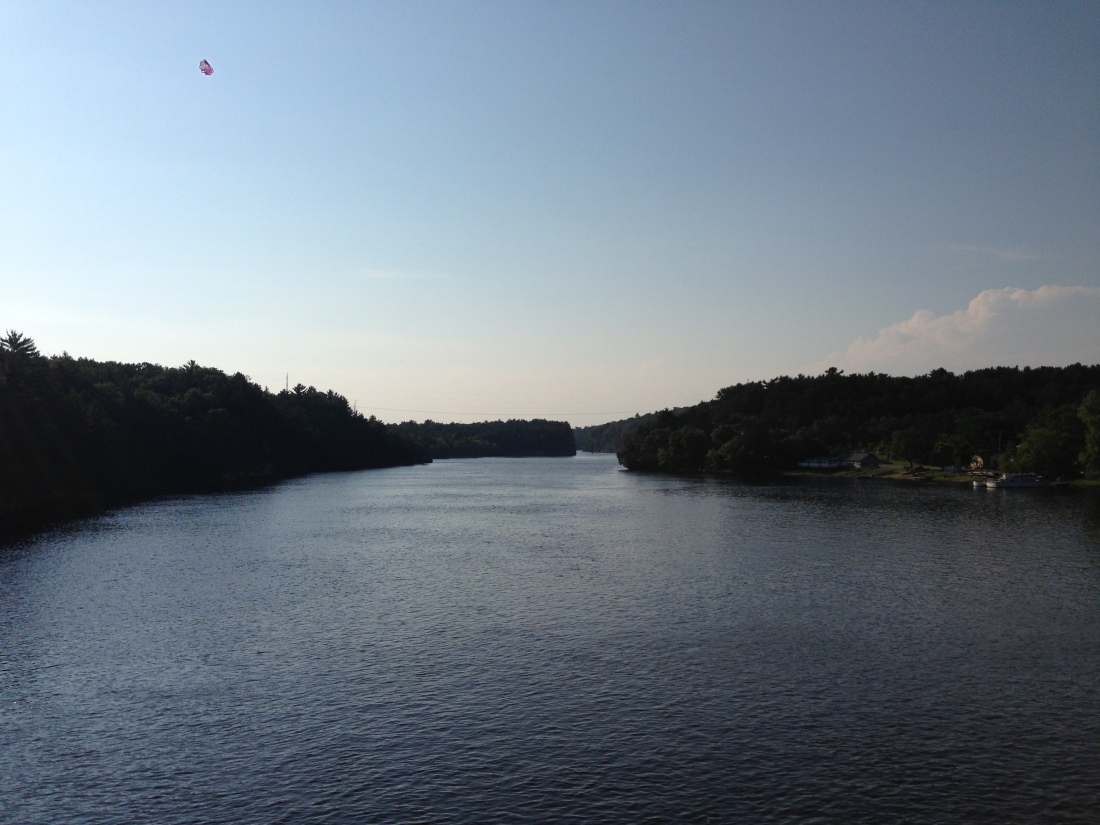 Some of their more interesting signs: 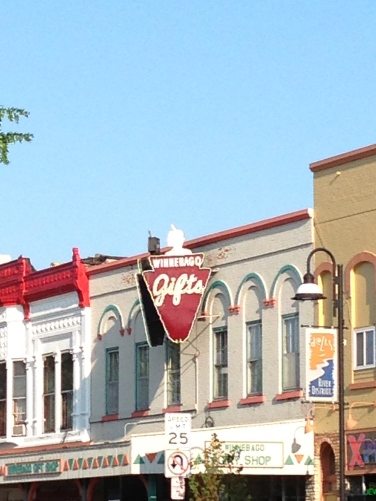 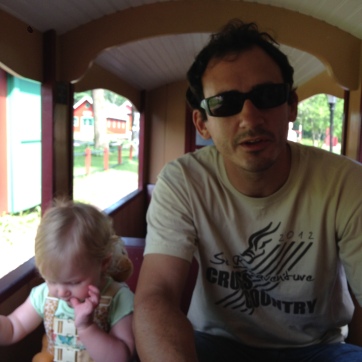 We stayed one night in Wisconsin Dells, and rolled out after the trip to the railroad. From there, we went to Chicago.

We arrived to Chicago in the middle afternoon, checked into our hotel and walked to the Lincoln Park Zoo. This is an amazing place – a totally free zoo that is really fun.

We were only in Chicago one night (and got our GPS stolen, but nothing else, fortunately), so we didn’t see much. We maximized our experience by walking the first day a lot.

Driving to Navy Pier the next day:

Henry playing in the museum:

After the museum, we headed out of town. Our eventual destination was Elkhart, Indiana, but we had to stop for dinner. We picked Gary, Indiana, because it was there at the right time. We thought we had made a huge mistake.

Gary is a faded steel town. The huge billboard tacked up on a building promising a “new Gary” that is from several administrations ago and is falling apart in testament. We were caught a bit between a rock and a hard place, as the twins had to have dinner. I think there were 6 places listed on TripAdvisor. We went with Angela’s Pantry because it was the best rated place.

Make the effort to go to Gary specifically so you don’t miss:

We called from the parking lot because we were worried they wouldn’t accommodate kids. Foolish notion! The restaurant is in a house, so the whole first floor is split into rooms. We got our own room; the kids got coloring books and crayons. We were treated like family. Tuesdays they do $7 tapas plates, so we got the aforementioned mac and cheese, Maryland crabcake, and a margherita pizza. It was borderline too much food. And every bite was amazing. They told us to special request anything at all for the kids and they would tell us if they could make it. The kids got fresh strawberries and blueberries and spaghetti with marinara. They got kid plates and kid forks. This isn’t usual (in my experience), and was really appreciated.

After dinner we went outside to let the kids run around for a bit. There is a large porch where friends were constantly stopping by and a big yard. Henry and I went to the sidewalk so he could point at every car and truck going by. Eleanor ran around and made friends with everyone.

We drove off to Elkhart for the night, but it was just a way stop on our way to the Toledo Zoo the next day.

We didn’t do anything in Toledo BUT the zoo. We didn’t stay there, we were just really excited for the zoo. Billed as one of the most complete zoos, I can say that the park experience was good; I have never seen so many zoo employees out and about. Eleanor didn’t nap on the drive from Elkhart to Toledo, so she fell asleep pretty early on in the stroller and Henry had a great time hunting ducks and hamming it up. 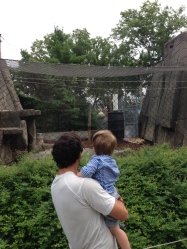 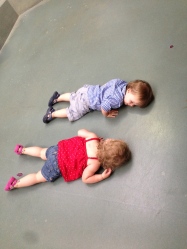 We spent a really full day there. The kids were so tired that when we hit the Aviary at the end (I had to see the cassowaries), they laid down on the floor. And it was very appropriate that we saw a bald eagle on July 4.

After the zoo, we headed for home! We got home right after the fireworks finished, a week to the day we drove out of Grand Forks.

I can’t wait to see what adventures we have next year!