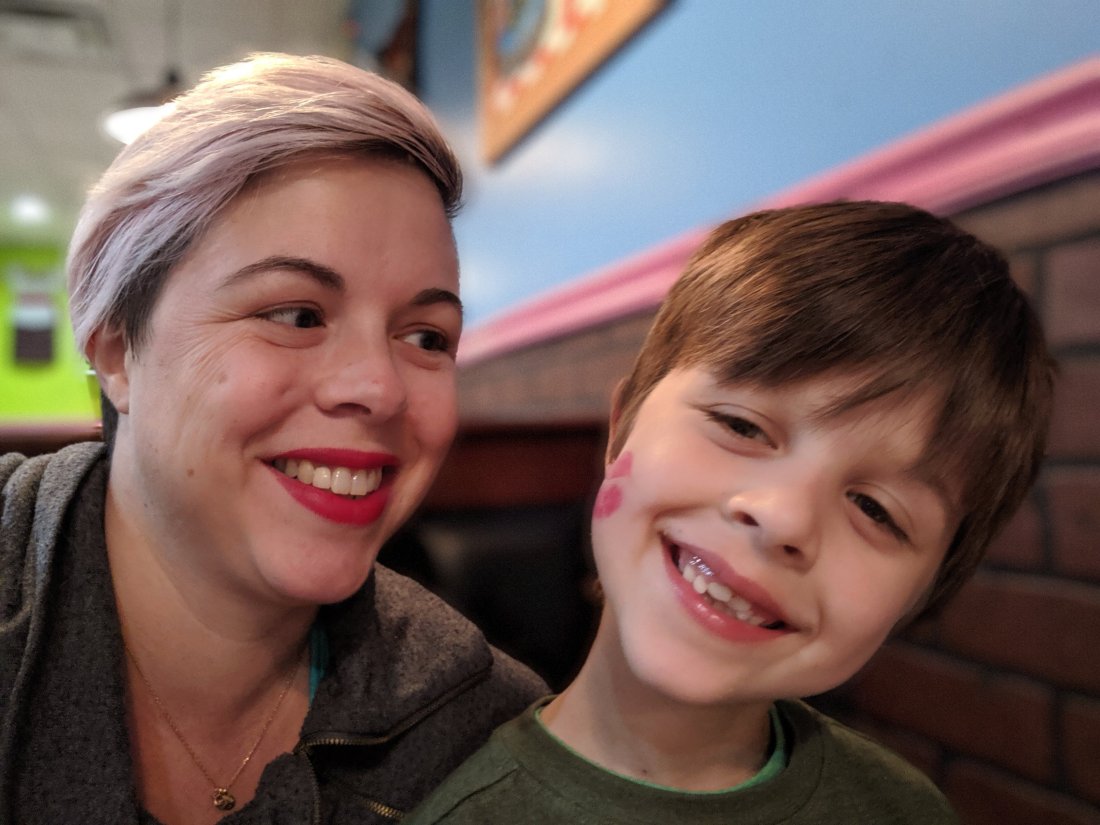 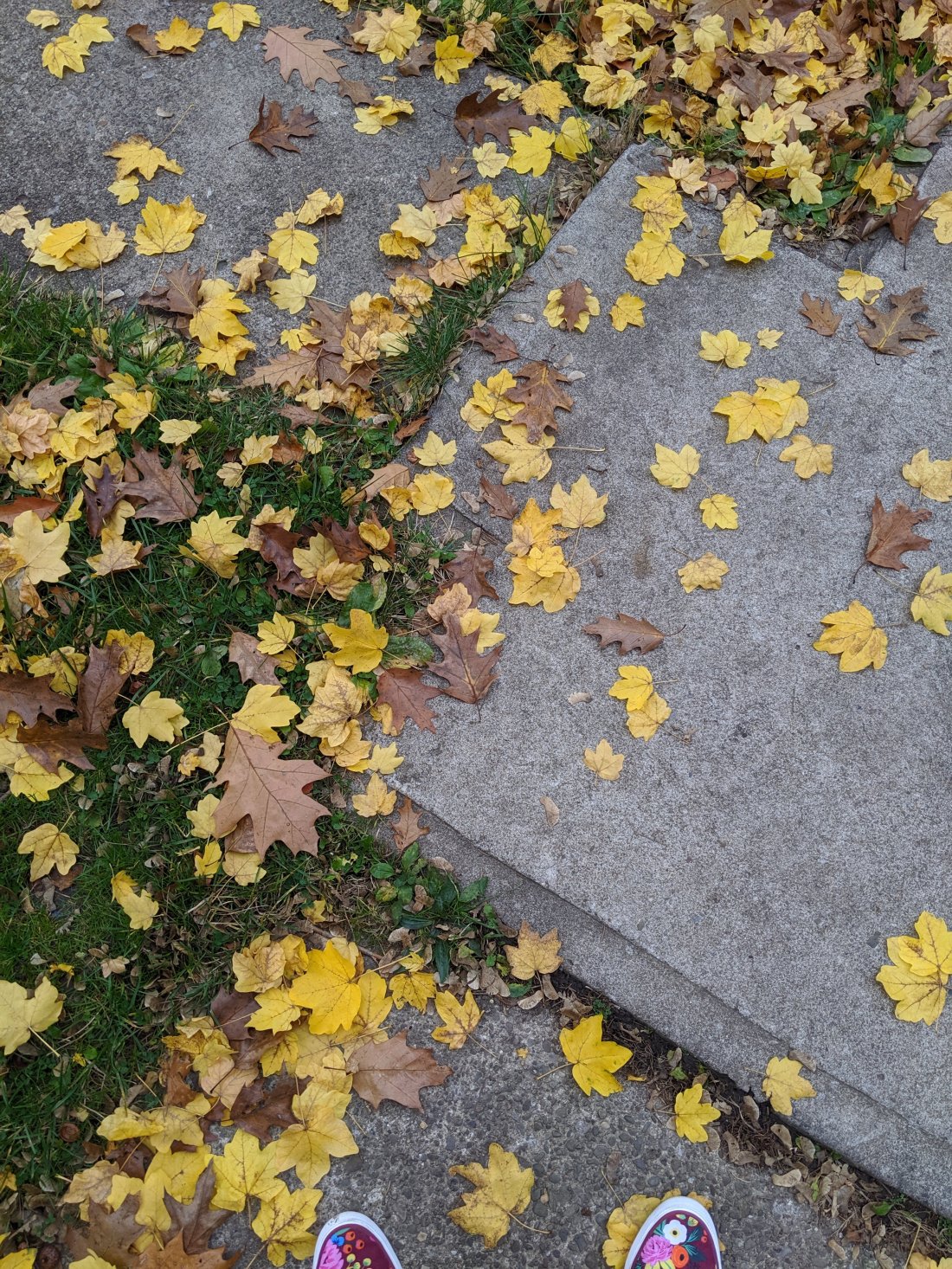 I’m trying to get a little work done, but Stark has other ideas. 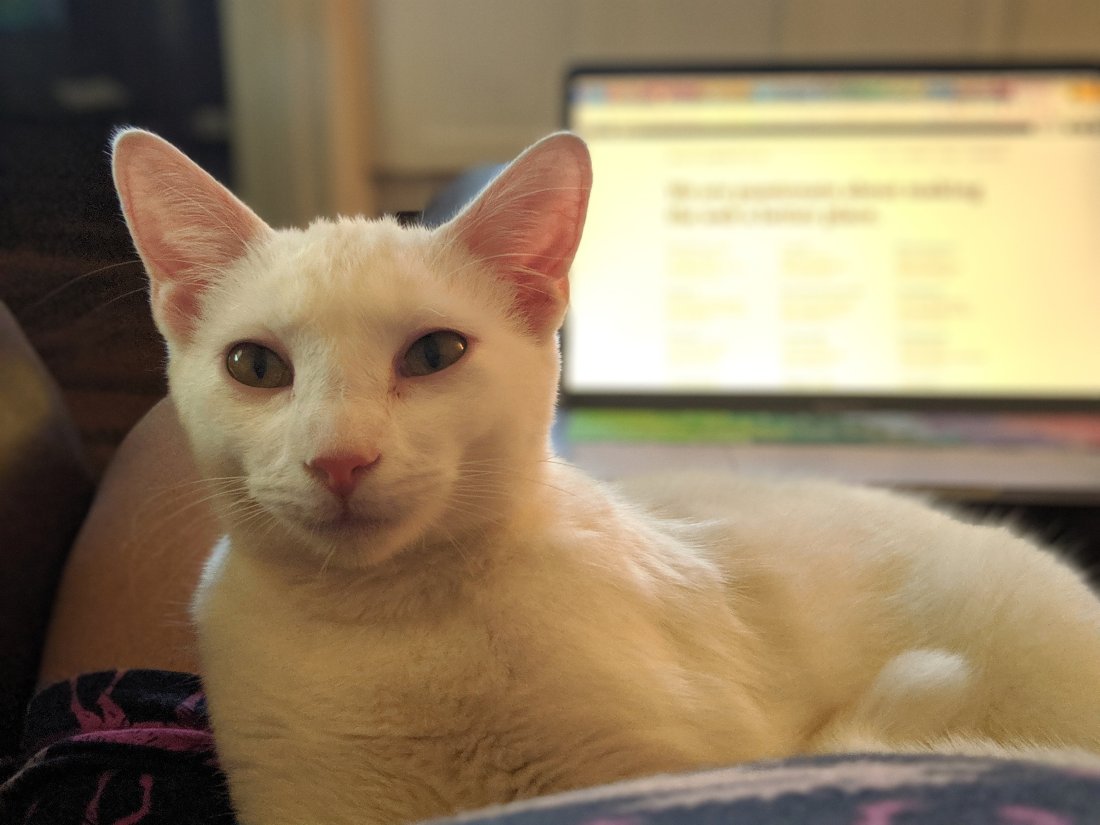 Little Ned Stark needs to knead when he’s falling asleep. He also sucks on sweaters, tees, and blankets. Anything handy. I think he was taken from his family too soon (like, in season one).

Sometimes rainy days have a magical-light quality. While waiting for my brekkies this morning in the tea shop I got a little bit of that.

Recently, one of my friends mentioned that Olean sounded so idyllic (until she remembered the snow), and it really put me in a contented frame of mind when it comes to my town. It is almost pathologically charming, and since I live in the city itself, I get to enjoy it all pretty much constantly. Here are some little vignettes about Olean, to help remind you that you should, in fact, move here (especially if you have a remote job).

I walk to work each morning through the local community college (JCC) campus. Right now our mornings are chilly and foggy. By the time I walked through today, the fog was lifting, but still clinging to the hills.

At least once a week, Bob and I (and sometimes the kids) eat at a local diner, Green Acres. They make a tremendous fish sandwich on Fridays. I like to top it with the tartar sauce and the coleslaw.

They also made this amazing California breakfast bowl once. I’ve never seen it on the menu again (but haven’t been back on a Sunday, I think, in the morning), but it was boss.

Another great option is the Hungry Burro, which is the local food truck. They make really great vegetarian grain bowls, and breakfast burritos. Their nitro cold brew coffee is so creamy and yum. It makes me go “mmm kofë.”

Another favorite downtown is On the Side. It’s subs and stuff, and it is like 20 feet wide and 150 feet long. It’s like eating in a shipping container. But the fish sub is to die for.

I walked with the boys to Tim Hortons the other day from our house (it’s an easy lure, because: tim bits). Henry can’t sit still. He’s got a lot of pent-up energy, and he tends to need to shift around and need to constantly floss. He’s also incredibly social, particularly with grown-ups. He loves to chat with them, and he will also go up and complement people if he likes their hair, shirt, necklace, whatever. So, we are in Tim Hortons eating our respective breakfasts, and Henry suddenly is chatting with the old ladies at the table next to us. They cooed over him, and he just glowed. We exchanged smiles, and they waved to Grant as well (who was busy stuffing tim bits).

It’s spooky season, which means it’s hockey season. Hockey is a fairly big part of our community, and it’s as common to hear that kids want to sign up for hockey as basketball or indoor soccer or football. Both Grant and Eleanor are enthusiastic about hockey. While at the rink last weekend, we saw two kids the twins knew from school and set up skating playdates for the next few weeks.

A few weekends ago, Bob got up at 6 am (we are not, habitually, early risers; we’re both night owls) and went to help build a new park. It was actually a rebuild of a park — the very park Bob grew up playing on. King Street Park is where our twins grew up playing, too, because we lived around the corner from it when they were babies. The equipment hadn’t changed in 30 years or more. Finally the common council was able to make it happen, and part of the build was a community event to actually put the park together. There were a ton of organized volunteers (like, Bona Responds from St. Bonaventure University) and aldermen (I think it should be alderpeople, but), Bob, and a couple other city folk. The kids and I came and helped rake the mulch, which took a surprising amount of time. It was exhausting and really fun, and the park has been crazy busy ever since! For people familiar with King Street Park, one of the pine trees has had a heart carved in it forever. (Also, there are more cool changes coming to King Street Park! Stay tuned!)

There’s a big billboard for Reids Food Barn that has been in the same place for, oh, eternity (the nice thing about Olean is that some things never change, and this is also a challenge). The billboard itself gets updated about quarterly, but it’s always Reids. Grant wanted a pic by it. My kids like to say “we fibbed about the barn” and “not a real barn” (both statements on the billboard). He also recently insisted on carrying our basket around Reids. Until I needed to add spaghetti sauce to it. Then it was TOO HEAVY MOM.

The farmer’s market that was finished late summer is wonderful. First, it’s two blocks from our house. Second, our cats take turns walking there with us each weekend and they’re becoming pretty popular with the vendors. It has also enhanced the park it’s in (Lincoln Park, right in the center of the city); the park has gotten some much-needed attention, and it’s also become much busier! On Thursdays, there’s music in the park, and one evening when we went they set up inside the market (rather than the gazebo) and it was pretty perfect.

Finally, here are some gratuitous photos of Grant (that are also on instagrant), but I think they help to subtly reinforce the idea that Olean is a kind of shangri-la.

Yesterday I got up with Grant around 7, and we spent the day together. The twins were there too, but they are really chill right now, and I was able to give G Unit enough attention that he was just awesome all day.

First thing in the morning, we all walked to the Farmers Market. Grant’s cat, Eleven, followed us there, and played with the twins for awhile, while Grant and I shopped. 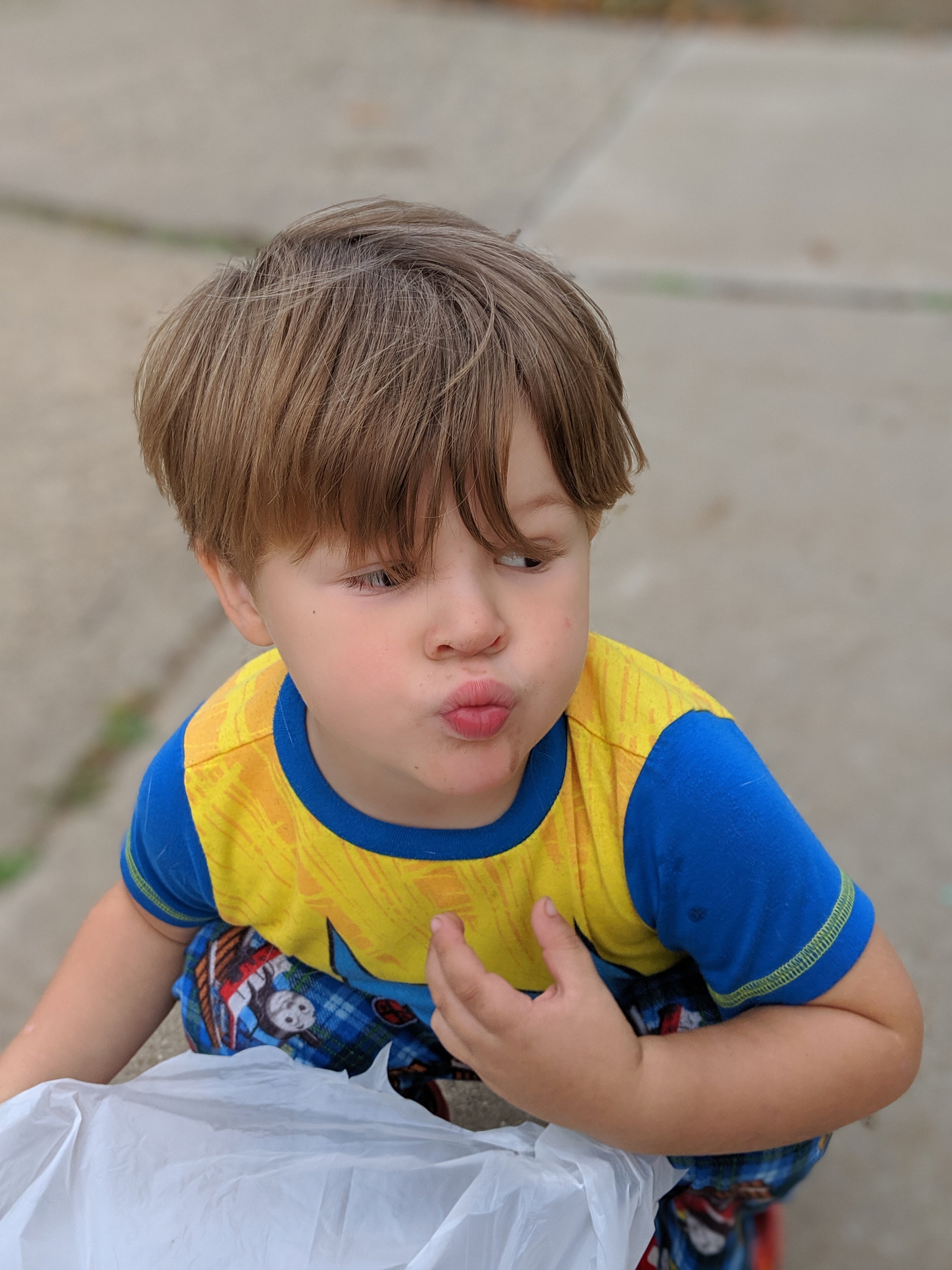 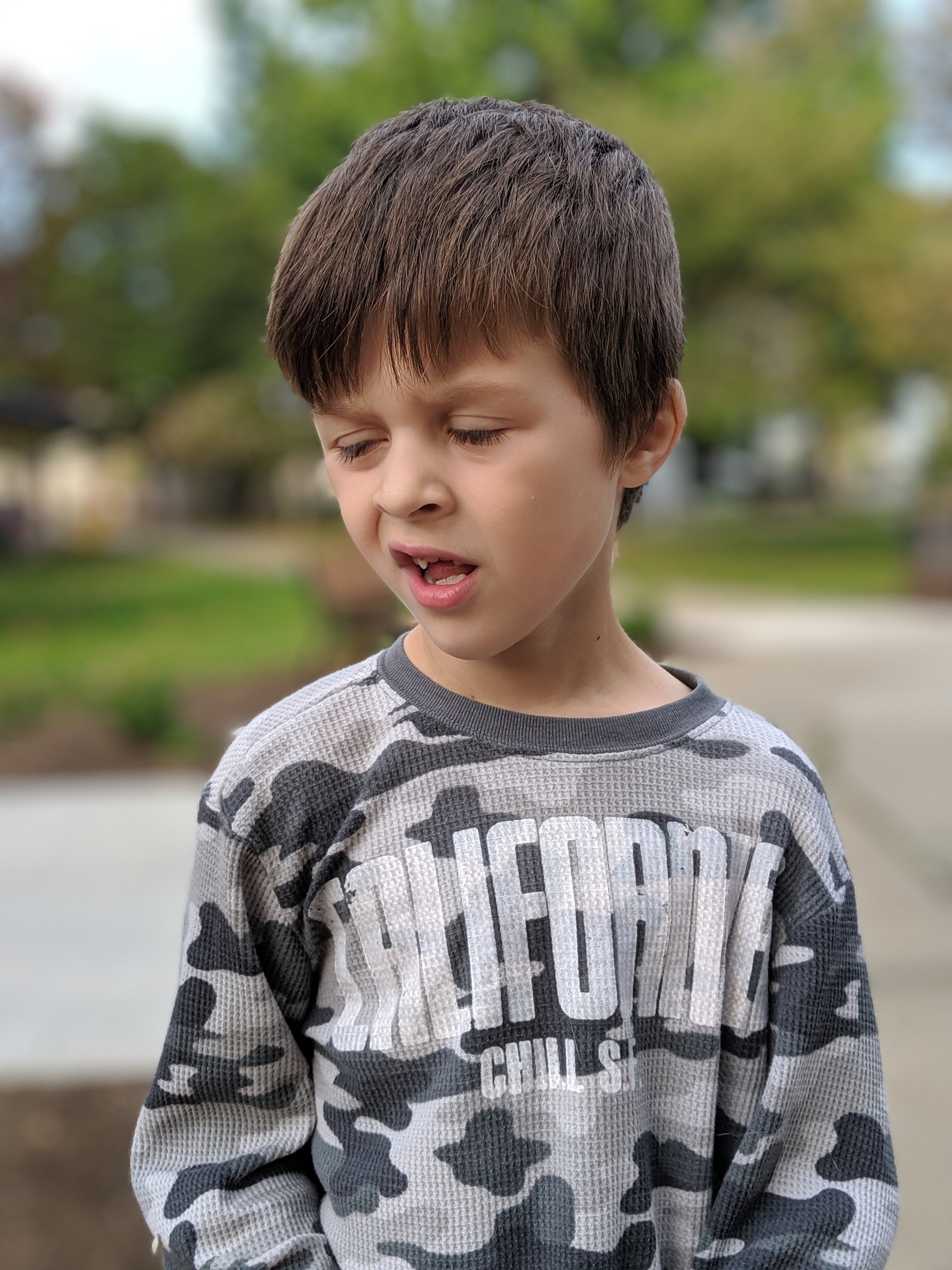 We bought honeycrisp apples, a cucumber, and a handful of honey sticks. I sat on a bench and drank my coffee while the twins played with some kids they found, and Grant divided his time between me, the water fountain, and the big kids. Eleven took himself home when a fire truck went screaming by, and we met him there when we walked back home.

Bob had gotten up early to help build King Street Park, which was going up in one day, with the help of a lot of volunteers. After we returned home, we all got changed out of our jammies, and we went to visit Bob at the site. I dropped the twins off with him, and Grant and I went to the grocery store.

On our way, we stopped by Wendy’s and I got fries and iced tea, and Grant got a jr Frosty and a small fry. He was thrilled with our vintage Wendy’s, which was fully empty, and we spent our time there trying our every. Single. Table. 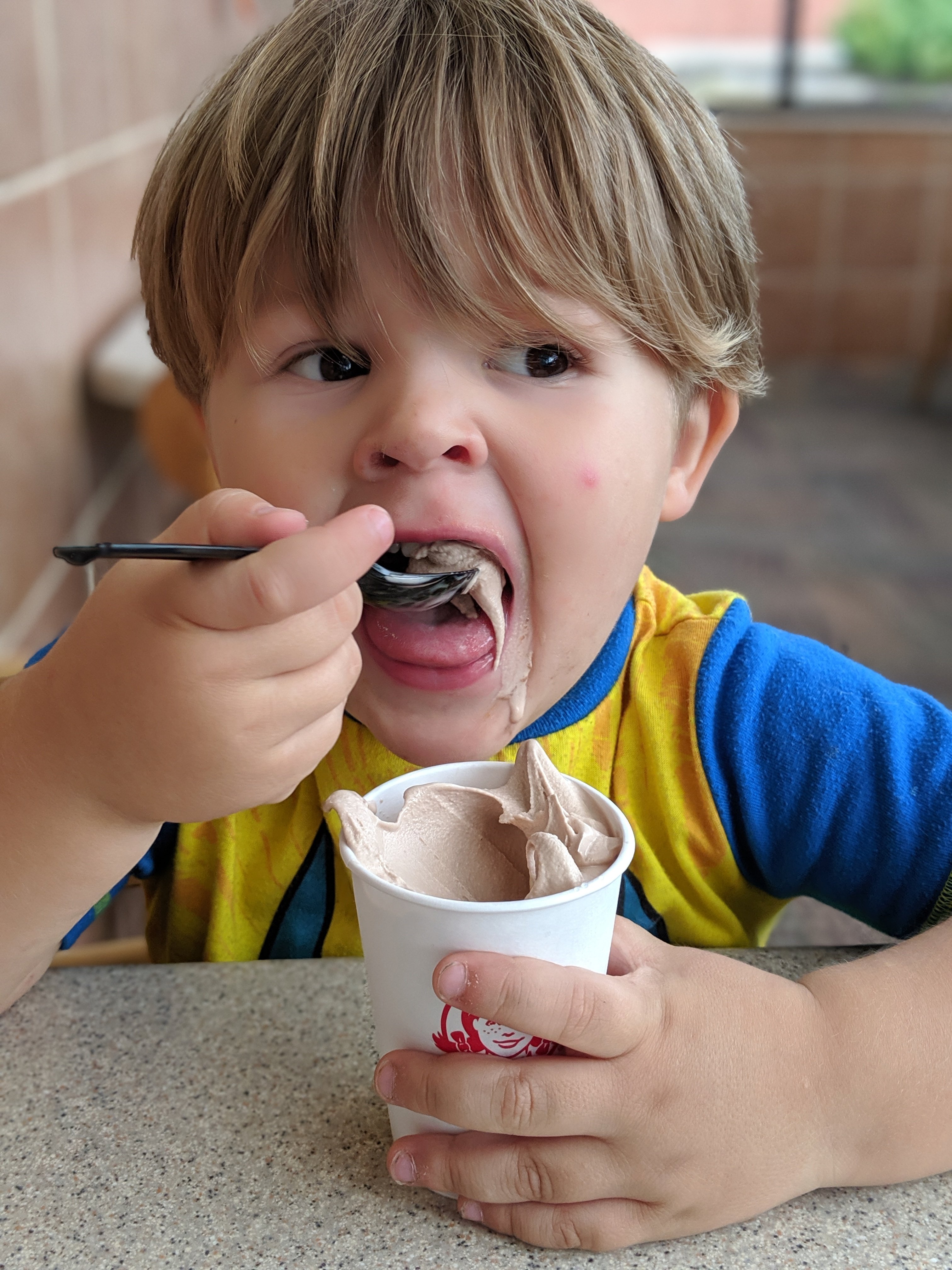 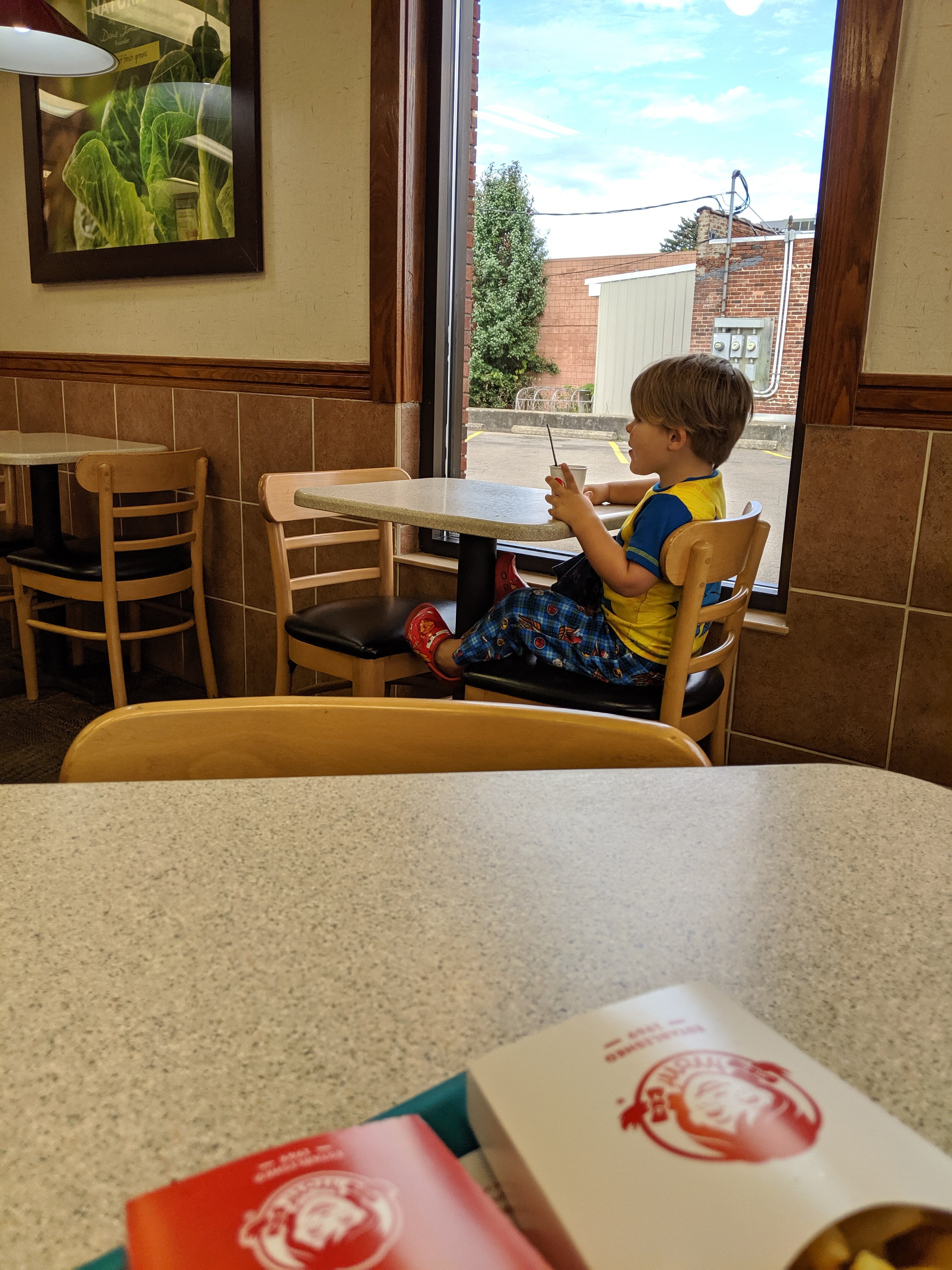 Apparently I did not get Grant changed before our grocery run.

We got our groceries, including a bunch of Gatorade for the park volunteers, and went back to the park. I gathered up the twins and we all headed home.

At home, I did a little cleaning up and gave the kids lunch. I tried to get Grant to nap, but he just “helped” me do some crossword puzzles. He was very “helpful,” and absolutely sincere. We also did a giant floor puzzle of Thomas. Then Bob asked us to come back to the park, so we went back, grabbed some rakes and spent a few hours shifting mulch around.

Grant was awesome. He used a rake, he did what he saw the grown-ups doing, and he was actually helpful! The devil works hard, but Grant works harder. We did this for hours mind you. He took breaks to play with a little girl there (who he told me in confidence is his best friend), but mostly, he raked. 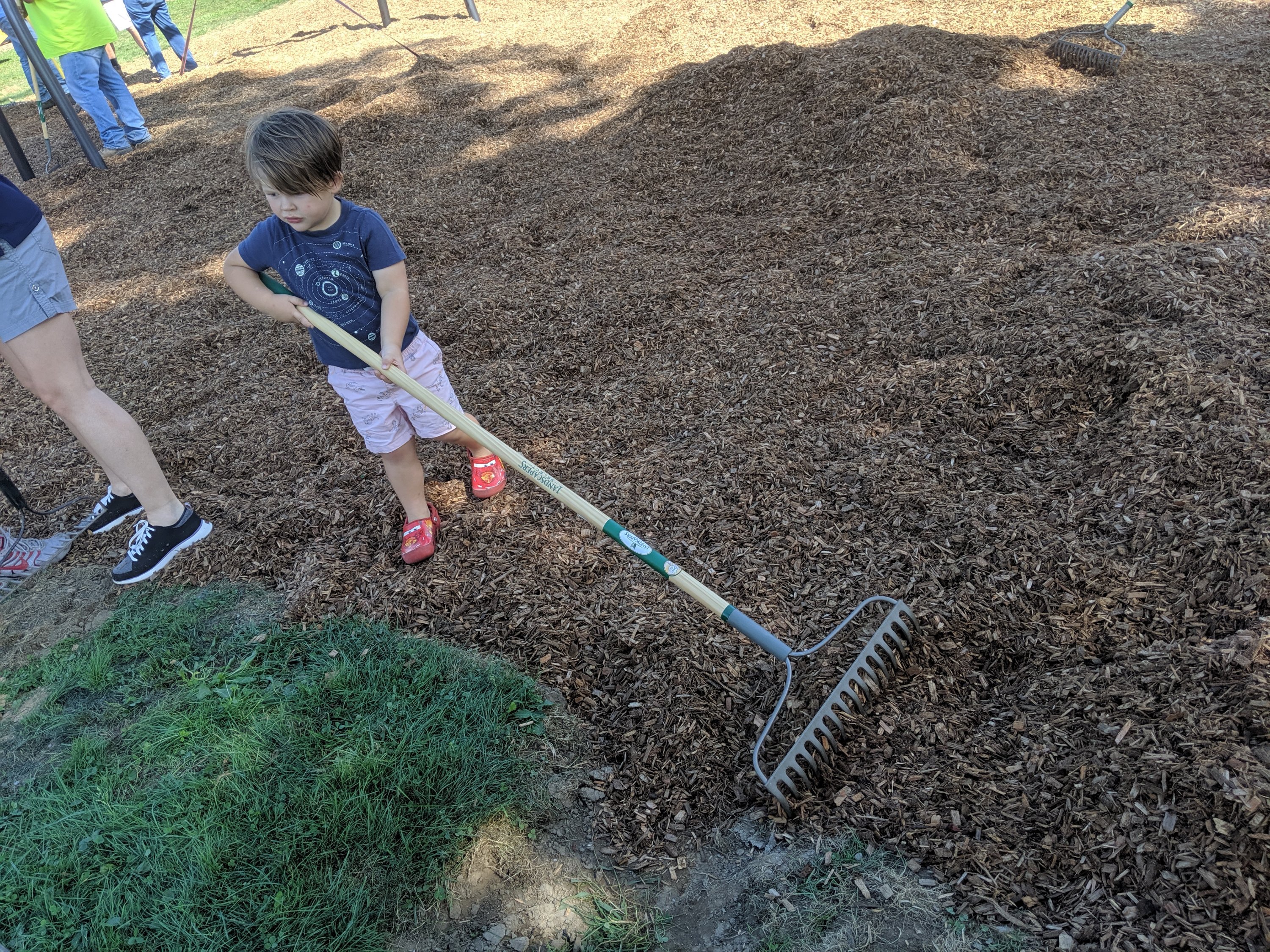 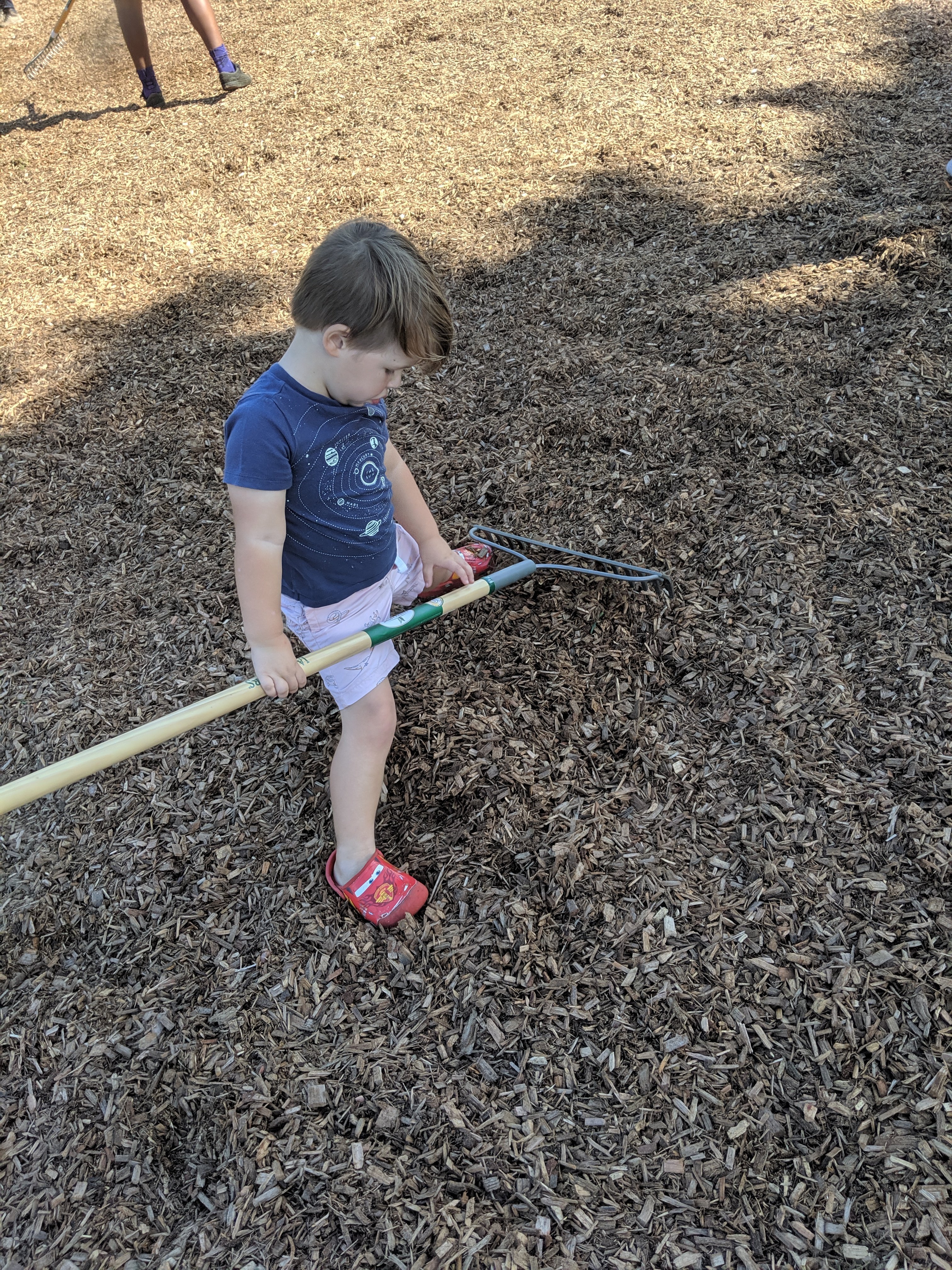 After the ribbon-cutting, I needed to hustle the boys back home (Eleanor stayed a bit longer with Bob) so I could clean the kitchen. My parents were coming over for dinner, and the house was a mess.

While I did the dishes, Grant kept busy with Henry. He also got his backpack out and was carefully packing and unpacking his swim stuff.

After my parents arrived, Bob suggested we pick up some cheese and other nibbles while the manicotti cooked. Quite naturally, Grant and I went to the store (second time that day!) He insisted on taking a purse, just like a grown-up. 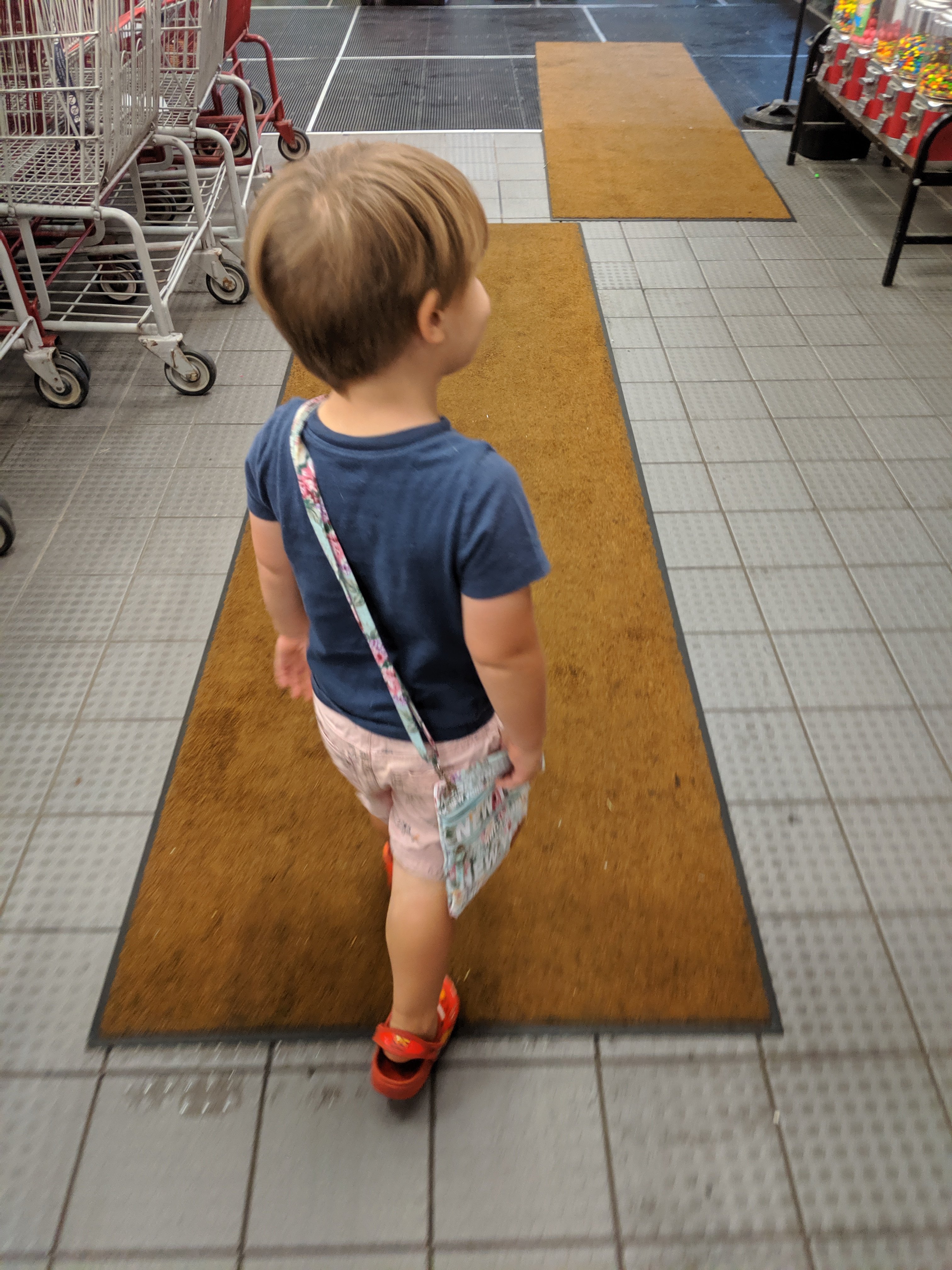 Back at home, I fed the kids first, and then the grown-ups sat down to eat. Grant carried his bowl from the kitchen counter over to the big table, because he always likes to sit with the grown-ups. He sits (ish, usually a combination of hovering around the right place setting) and he makes conversation, and he beams at everyone. While we lingered over our plates, he finished up, got down, and played with a large cardboard box and one of his bigger cars.

After my parents left, it was time to bundle him off to bed. He has a box of books he loves (the box looks like a book, and inside are 12 small board books), and we only made it through four of the books in it before he asked for cuddles. He was getting comfortable and closing his eyes when he whispered to me about the tractors at the park. At bedtime, Grant has started to bring up things that happened during his day that he needs discussion around. Sometimes it’s how loud motorcycles are, whether fireworks are scary, if we did something particularly fun, etc. Last night, it was the two tractors that were moving the mulch around. One was little(er) and one was absolutely massive. We whispered a little about how cool they were, and then he drifted off to sleep, clearly exhausted by his very good day.

Unless I’m very much mistaken? 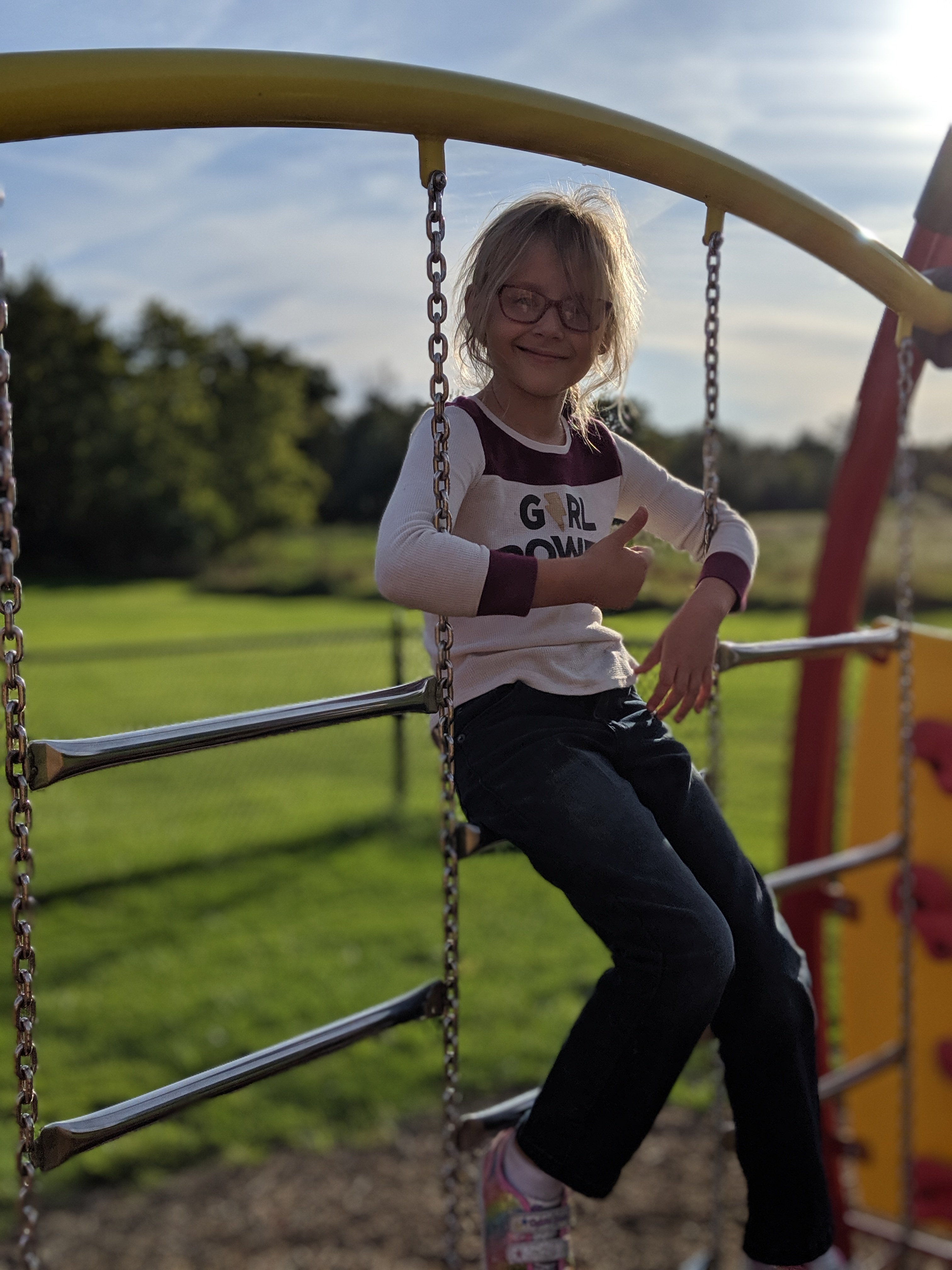 I heard Grant in his room over the weekend singing to himself. He loves Wheels on the Bus, but he gets caught in an infinite loop. I tried to sneak a video of him, but he caught me. It’s long, but it pays off.

The cats have learned to be particularly tolerant of his manhandling of them. If you turn up the volume you’ll hear an annoying Youtuber in the background because the twins were watching some Youtube at the same time. Ignore that best you can.

I walk through Jamestown Community College campus every morning on my walk to my co-working space. Often, I pass the folks doing the groundskeeping, and we always trade cheerful “good morning!”s.

This morning, they were pruning trees, and had several vehicles pulled up onto the pathways to carry off the trimmed branches.

Very carefully placed in the back of one vehicle was an upright branch, clearly positioned with intention. Nestled in the branches, surrounded by shorn twigs and obviously preserved, was a nest.

I have thought about it all day. One of the groundskeepers finding the empty nest in the pile of refuse, and deliberately saving it. Clipping surrounding branches so that it would be more easily transferrable. Taking care to preserve it in the environment it came from. Maybe taking it home to show a partner or kid. Maybe taking it to the groundskeepers break room (if there is such a thing) to show to others who might be interested.

It’s just a nest, and just a moment. But so much more. 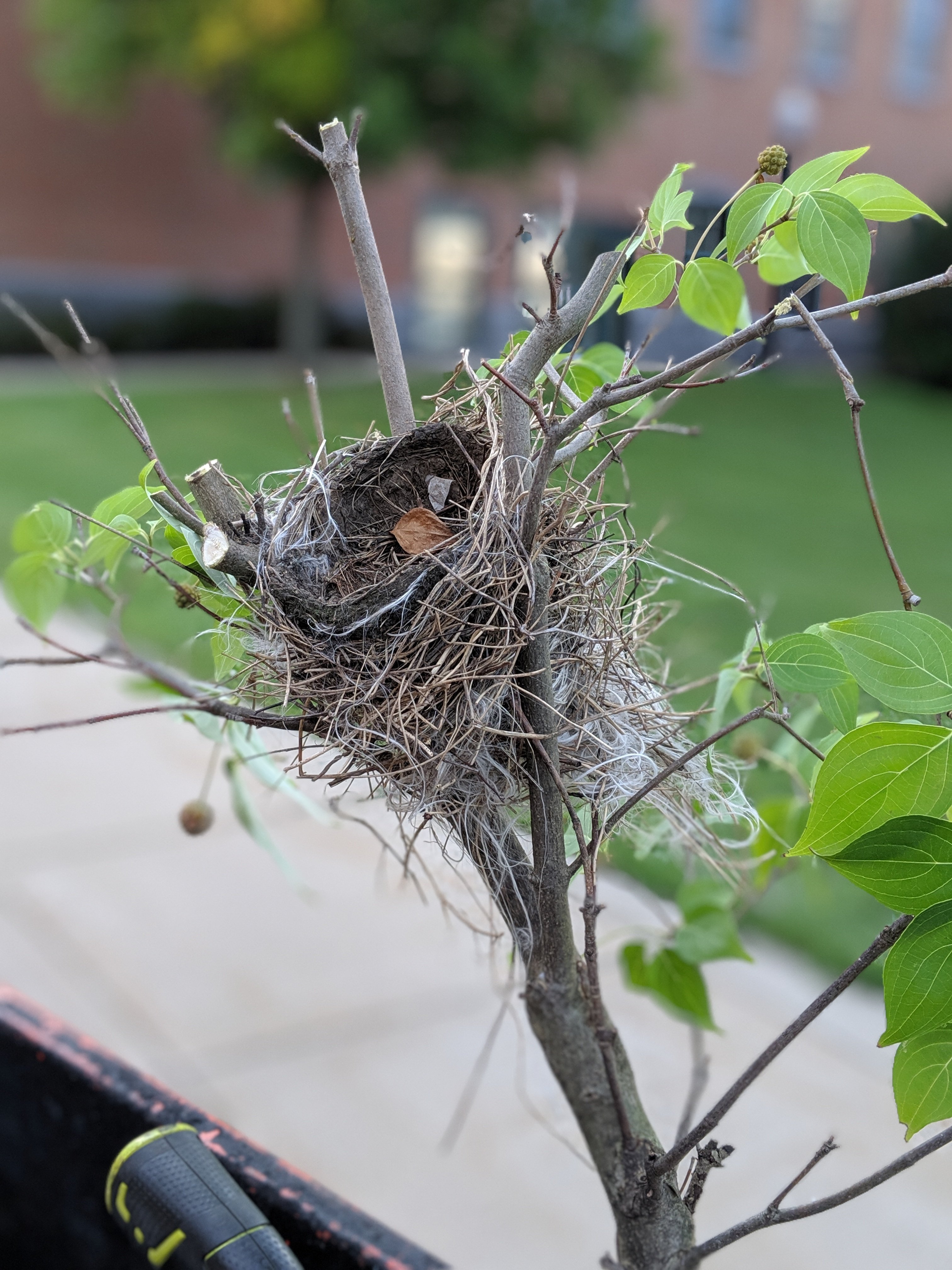 I caught Grant singing to himself while he "does the dishes"
Loading Comments...