Every year around this time, apparently, I took a look at my annual stats and see what topics I write about are most popular that year. It makes no sense – I should be doing this at the end of the year (or the beginning), but I do it smack in the middle. Not being one to break with pointless tradition, here is where we are so far for 2017: 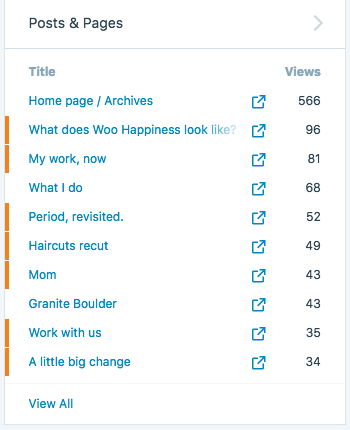 In the top 10, we see the evergreen Granite Boulder (remember, it’s about paint) that has dropped out of the top position (finally), 5 posts about work / working, a post about periods, a post about my son cutting my daughter’s hair (masterfully), and a post about my mom. Since the home page / archives is always in the numebr one position, that means that Work outweighed Home posts this year, but just slightly. Considering that the vast, vast majority of posts on this blog for the past year have been just photos of Grant, that is really saying something!

How does that compare with 2016? Well, remember I had a baby last year, and those are always great for stats (I mean, at first): 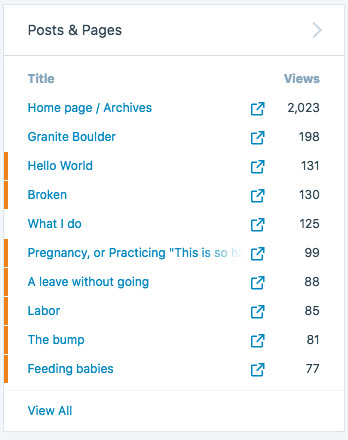 See, Granite Boulder. Super popular. Inexplicably. It’s actually in the top 10 going back to 2012. Then, Grant’s birth announcement leads a Home-heavy line up, including a post about Eleanor breaking her arm, a post about pregnancy, how to go on maternity leave in a remote work environment (ok, this is in both categories), the aptly named labor post, Grant kicking in the womb, and a post about feeding babies. On the Work side of things, we have the aforementioned maternity leave post, and 2014’s popular What I Do post. Clearly, having a baby and that experience influenced my output. Plus, I was on maternity leave for 5 months during the second half of the year. 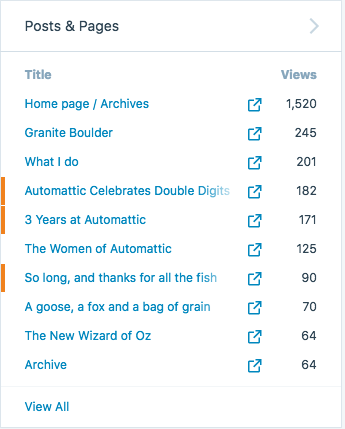 Obviously, Granite Boulder. Then four posts about work – the previously linked What I Do post, Automattic celebrating double digits, my three-year work anniversary, and 2013’s Women of Automattic post. Then we have two about Home – the one where we move, and the one about reading Wizard of Oz to the kids.

What does the rest of 2017 hold? I suspect it’s going to swing pretty heavily towards work. Not only does that seem popular overall, it’s also what I have planned for the rest of the year. There is a lot going on in my day-to-day role, and working in an entirely new product area (for me) is exciting and makes me stop to think and challenge assumptions I’ve previously held. It’s a refreshing change, and I’m sure that some of that thinking and consideration will bubble over to the blog. Also, I am speaking at SDX later this month, and will be sharing my thoughts on that soon. Although it makes me nervous, I want to begin speaking more actively in the support and wider WordPress community, so you may see more from me on that front as well.

I’ll be interested to see if we can bump Granite Boulder out of the top 10 entirely before the end of the year!